On my way home from work, I was thinking about what kind of bathroom I want to build in for my cabin.

The one thing I don’t need is to feel cramped, so I want to put in a window somewhere. There’s really no substitute for natural light even if it has to come through frosted glass or a curtain (I prefer the curtain). Now that leaves size.

There are many examples on the web of tiny houses that are as big as the average bathroom in the U.S., but that’s really not what I’m looking to build. My  bathroom now is 5′ x 7′ and being in the middle of the apartment, it has no windows. With a tiny home that’s not a problem anymore since practically every room can have windows… or the whole house can be just one room with just the bathroom separate.

This afternoon, I sat down to sketch out a few ideas and the first thing I realized is that I know nothing about blueprints!

After a bit of Googling, I decided I didn’t like the symbols ordinarily used in blueprints. They’re a little bare and often have little in common and almost all of them are not to scale. E.G. A toilet seat and bidet looks almost exactly the same and both are about the same width as a shower on some blueprints. Even worse, most have heavy-handed copyright licenses.

Since I don’t want to get sued, I created a few of my own symbols for the bathroom. I wanted some that I can move around on a blank canvas and get reasonable accuracy in scale and still be clear in any orientation.

I sent a few of these to a friend and he suggested adding my own license/disclaimer to avoid the afore-mentioned potential lawsuit as well as making sure these are completely free to use for everyone. Ideally, I’d like to see people create their own layouts from these and perhaps make improvements since I plan to add more to them. I have the PSD files for these which I can email to anyone interested.

Sketching on a computer is a bit awkward when you don’t have specialized architectural/blueprint/schematic software. I figured I’d start with something I know, which is Photoshop. First, I set the canvas ruler to inches instead of pixels and pulled up the grid (Ctrl + ‘ [apostrophe] on Windows). I figured I’ll make each small square on the ruler 3 inches as a basic guide so a big square would be 12 inches (there are 4 per big square). 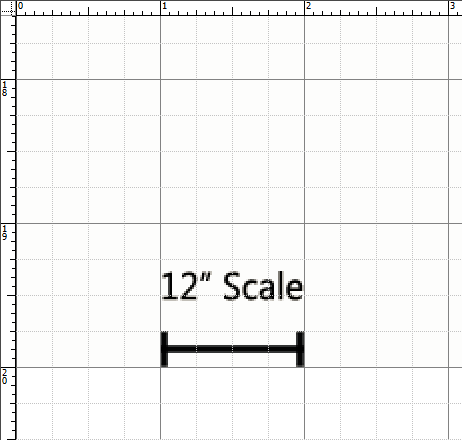 Note the inch ruler on top and left. There is a little more than 36 square inches represented here.

And I threw together a few representations of actual “stuff”. These are measured from my own bathroom, but the doors sizes are bigger as well as the shower stalls and closets (none of which I have in my bathroom). Also, I have a vanity not a pedestal sink.

I also started on some kitchen stuff, but I’ll add to these later.

After a few sheets of crumpled paper (I.E. Delete key)

These took a bit longer than expected, but here are attempts 9, 10 and 11.

Note the top and left walls are thicker because they are load bearing.

The thicker walls are 2″ x 6″ load bearing studs, which would also allow room for plumbing. I’m actually thinking of creating a false, non load-bearing, wall in front of the actual outside wall because all the pipes may weaken the structure. That’s the biggest interior at 8′ x 7′ and the rest are 8′ x 5′. 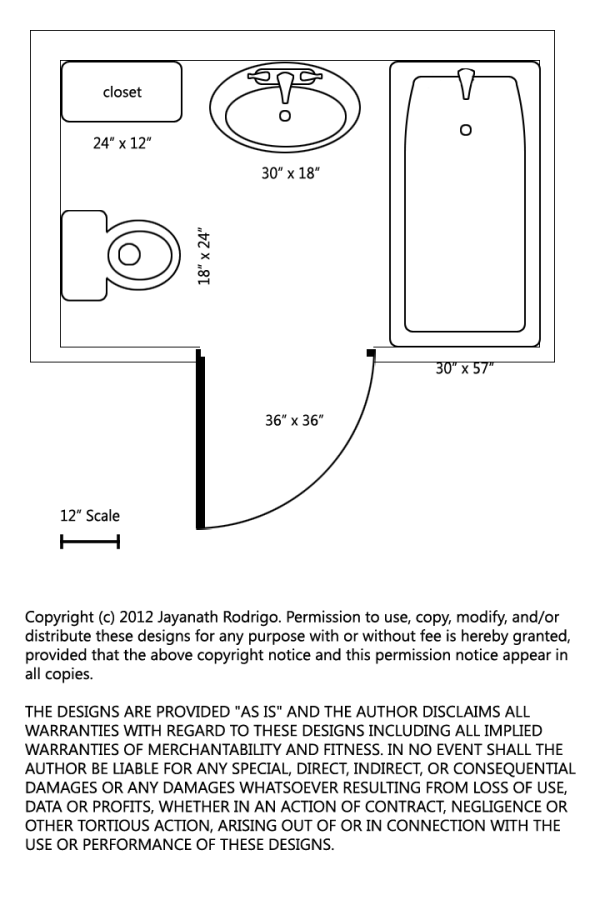 This is the closest to my bathroom, except mine is slightly shorter and has a vanity instead.

I’m starting to think a bath is a waste of space in a tiny house. Plus all that wasted water! 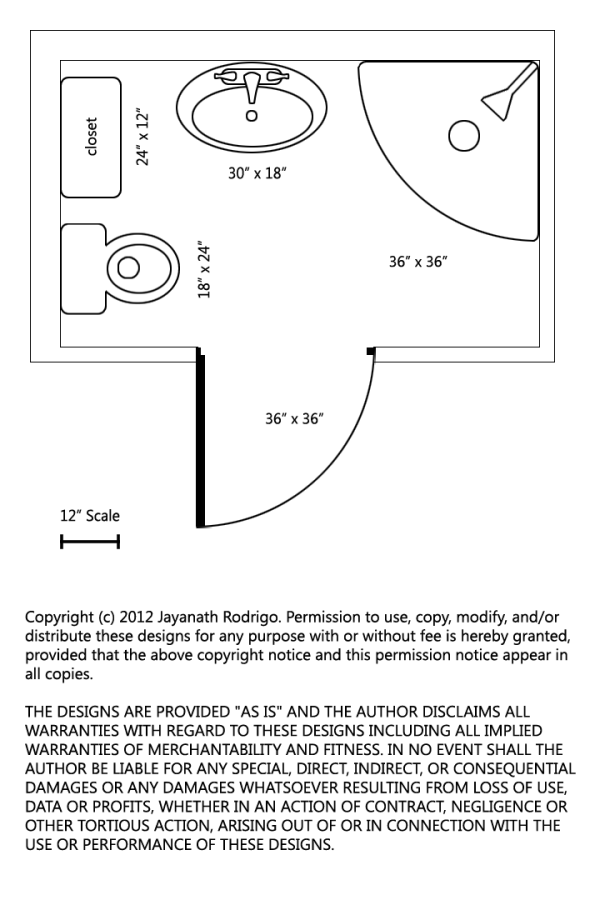 I think we found the Goldilocks zone.

While the first one offers the most amount of space inside, that also eats into the rest of the cabin, which I plan to be 16′ x 16′. This will be a two storey structure, but I don’t want the bottom floor to be completely taken over by the bathroom since the kitchen and living area (first opens to the second) needs to fit there too. I also want to make the second floor open up to the ground floor with a balcony so the floor may be 12′ x 16′.

I tried to follow the New York building codes as closely as possible, though I can’t guarantee that these won’t be 100% error free.  The most important part to me was to make sure there was room for a wheelchair to turn around inside. I don’t know how long I’ll live in the cabin and in case (heaven forbid) I end up in a wheelchair, I want to make bloody sure I can still live in my cabin without assistance. Also, I don’t know if I’ll have any guests with special needs either.

Once I get some more time, I’ll put together all the plumbing lines that need to go into the walls. I may change this as I draw them in since I don’t want to weaken the structure in any way by cutting into the studs for pipes, even if they’re 2″ x 6″.

Please be advised that these are rough sketches and under no circumstances should you build on these without getting an architect or engineer to sign off on it! As always make sure you follow local building codes and when in doubt, call your local building inspector for advice.