Every once in a while, I get to watch a movie that really puts things into perspective and brings clarity to my view of society. This isn’t one of them. 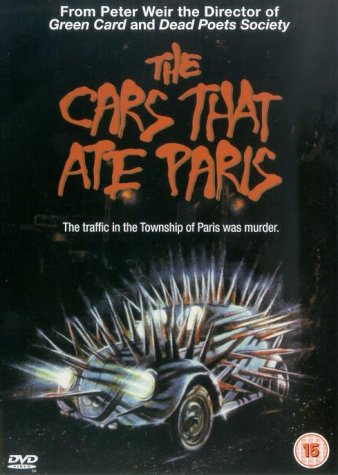 This is the story of the small town of “Paris” in middle-of-nowhere Australia, where the residents are causing fatal accidents on purpose to profit from the victims; the unsuspecting visitors. Those who survive the grusome outcome of the locals’ antics — the unlucky ones — are lobotomized and turned into “vegies” and the surgeon has his way with them as medical experiments. The other locals go all Monster Garage on the visitors’ wrecks and turn them into demolition machines for the next round.

That is… until the town’s own unlikely anti-hero turns things around amid the chaos caused by the hotrod hooligans.

Released in 1974, this is an all Australian production and the first feature length movie directed by Peter Weir, better known for his later American films, Dead Poets Society, Master and Commander and The Truman Show.

With a plot that’s a horror-parody of sorts and, although not of the same vibe as Peter Jackson’s Bad Taste, is still just low-budget and ridiculous enough to be thoroughly enjoyable. And just goes to show that directors who make silly low-budget sci-fi/horror/comedy films early in their careers can really surprise you later.

The taglines vary from the original “They were the cars that ate Paris” to the DVD’s “The traffic in the township of Paris was murder”. The American release was retitled “The Cars That Eat People”. If possible, get the original Australian version because it doesn’t have the annoying narrator and is the best one overall.

2 thoughts on “Movie of the Week: The Cars That Ate Paris”