If anyone remembers the good ol’ days of TechTV (before it was mauled, regurgitated, re-consumed and finally defecated by G4), there was a wonderful show on called “Invent This“. It showcased the creations and personas of quirky, yet deceptively brilliant, inventors as well as the history that lead them to where they are today.

One of these inventors was Sanford Ponder, a former musician who later went on to create The Icopod or The Pod as it was often referred to. The underlying premise was to create a temporary or semi-permanent shelter for disaster relief, social gatherings or for impoverished settlements from nothing but pre-cut sections of treated cardboard. 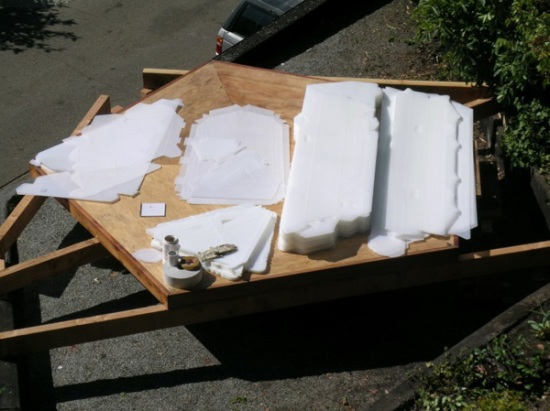 That’s right… Cardboard. The theory being a lightweight assembly of repeating pieces is the most efficient and elegant way to build shelters that someone would actually want to live in.

All the sections going up

And is it any wonder why The Pod was a smash hit at the burning man festival.

Looks mighty cozy to me.

On the series, Invent This!, Mr. Ponder goes on to envision an entire village of these pods with much more complex arrangements. The goal being to shed away what he perceives to be distracting end goals which actually detract from the quality of life one could have. I think he may be on to something.

We live in a society where we’re constantly fed our own wants. Wants that eventually become needs if only because they’ve been hammered into our psyche since the day the perception of our own existence was differentiated between “I” and “Not I”. But how much of these wants do we actually need? It’s amazing how much clarity one can achieve when one is forced to live without luxuries.

And why not live without them? How much stuff do we need to fill our lives with? How many “things” do we need to accumulate before realizing that none of it is ever enough and the high is only temporary.

That said, I think there’s a great future for products like The Pod. If they can be made permanent and more durable and safer or if a whole different class of structures can be cheaply made with the same premise, we may finally have the capability to decide what’s really important in our lives. Living in a shelter such as this makes it an absolute necesity to only keep what you need.